Bringing an animation to life

Krushia is an animated character created by author Katina Marshell Cotton-Silwa.  When she asked me to create a doll in Krushia’s likeness, I couldn’t resist.

After a couple of months plus, Krushia is complete and ready to go home!  As she’s being prepared to travel to her destination, I wanted to share some photos of her and a bit about my creative progress.

Krushia is a 27″ OOAK cloth doll that can stand unassisted.

In case you missed my previous post, here’s a trailer about Krushia:

Krushia was built with her special features in mind.  She’s got dainty hands and a thin physique.

Her torso and body are based on my very simple Orianna pattern, with customized changes to the head and hands.  The pattern was enlarged 10% and instead of using button joints, she got an armature that enables her to pose and balance.  Her clothing and shoes are designed to match the illustration as closely as possible.

Orianna was designed many years ago when I first began making dolls.  It’s such a simple-looking pattern, but I like the nostalgia of showing how things evolve and change through the years. No matter how much a person learns or how their skills improve over time, it’s always the foundation that’s important.  A good pattern is the beginning of a great doll.  Isn’t that concept true of everything in life?

That ties into why I wanted to make this doll.  I like her concept very much because she represents the idea that you can do anything you want to. For me, that’s being an artist and making like-minded friends while I’m very busy with a different career (tax and accounting – which is really kind of boring and takes up way more of my time than I would like).  Life is too complex and short to forget to do the things you enjoy and allow you to be who you are.  What do you need to make time for?

Krushia’s head is very special.  It is intricately needle-sculpted and has special darts that create a perfect chin and jawline.  To make the face especially lively and animated, it is painted in acrylics and shaded with artist chalk.  The first layer of color is done in colored pencil.  It’s always my go-to base.

You’ll notice that her hair changed in the photos above.  She started out with Alpaca yarn fiber, but she needed a really tight curl.  I’m used to natural fibers for hair, but this time I went for synthetic hair instead.  It worked out absolutely perfect, and I’m not sure who had more fun – me or the doll?

One of the most important parts of Krushia’s outfit is the key around her neck.  It’s a magic key, after all!

This key is made from polymer clay over aluminum foil and copper wire (so it won’t break), and painted with silver paint overlayed with an iridescent interference wash and a layer of crystal glaze.  I also added some micro beads to mimic the design in the illustration.  The ruby is a dab of red paint.

Krushia’s necklace is made of painted button thread.  A crochet hook was used to make a chain stitch.

The key itself is very intricate and had to be made small-scale, which was particularly challenging for me.  But I like how it turned out because it’s got that handmade charm.

You’ll also notice that her buttons are tiny pom-poms.  This is because Krushia is an animation.  Since this is a cloth doll, I wanted to try and keep her made from fabric as much as possible, with the exception of the key, of course.

Krushia has cute white shoes.  They are made from stretchy white lycra fabric, the same as her socks.

Here are a few in-process photos of the shoes.

If you watched the video, you know that Krushia has three feline friends.  I have two cats, who love her too!

This is Ziggy Startdust, an odd-eyed Turkish Angora.  He literally jumped up to Krushia, sat right down, and put his paw on her foot.  It’s not a pose, I promise!

Melody, my blue Scottish Fold, decided to join and meet Krushia as well.  She stayed for just a minute before jumping down.  How typical of her!  And yes, that was a pose.

If you have cats, you know they do what they want.  Imagine my surprise when I put Krushia away and found them both together again on the photo table.  Well, actually, I guess I was not that surprised.  But I did take the opportunity…

This project was a joy to me.  It was a very interesting challenge, too.  Usually, when I make a doll, it just evolves.  I make it the way I want, the way I think it should be.  Eventually, I like to think it comes to life on its own, and I just help it happen.  Krushia already existed before I got started, so it was a different experience to create her.   I think that’s what makes her more special to me.

I want to thank Katina for asking me to design her doll, and of course, for waiting so patiently for me to finish her and to make changes along the way, just to get it right.  I’m completely flattered and I had a lot of fun.

I’d also like to ask you, my readers, to please leave comments and kudos.  Tomorrow is Post Office Day.  Off she will go!  Melody, Ziggy, and I will miss you! 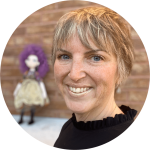 How to Brighten Your Day Blue

I’m Rivkah Mizrahi: a doll artist, blogger, and tax accountant. I’m proud of my unusual hobby – mostly because it prevents me from being too serious.

This blog is a place for inspiration in the art of doll making. When I make dolls, I generally begin with fabric, then incorporate different mediums into my work. Here, I show you what I do and how I do it.

Thanks for visiting and have a DOLLightful day!

Turning whimsy into reality, one doll at a time♡ by Rivkah Mizrahi

Having a ton of fun making eyes. Leslie O’Leary

She wanted to go shopping for a hat and some jewelry, but I said we should go on a walk first. What an agreeable little doll. Lucky me.

Mary Abbott She is so pretty brillant thanks for sharing

Please remember that all photos, drawings and writings on this blog may not be redistributed or copied without my permission.